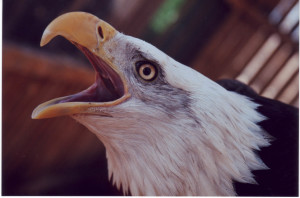 Beautiful, Bold, Boisterous? Yes, all of these are words that can be used to describe the RMRP’s educational Bald Eagle. Many Fort Collins residents have come to know this bird who has been in residence at the CSU Environmental Learning Center for a decade. She has been known to chortle (a loud vocalization) at her caretakers and people that visit her regularly. Nothing sounds as beautiful as a Bald Eagle greeting in the morning.

Unfortunately, she came to the RMRP through tragic and illegal circumstance. A poacher brought her out of the skies when she was less than two years old. Found along the North Platte River near Scottsbluff, NE, in July of 1996, she was admitted to Riverside Zoo, and then transferred to the Rocky Mountain Raptor Program. Upon her admission, she had an open chest wound and several fractures to her left elbow caused by a gunshot. Her chest wound healed, but the wing injury prevents her from flying.  She contracted West Nile virus in 2003. Although she recovered from the virus, it did lead to eventual right eye blindness and deflation of her right eye. 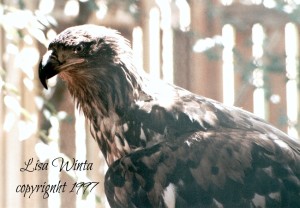 Being a big bald eagle, she was be a handful to work with and was very particular about where she works. This lady was a great and royal personality. She spent many years showing hundreds of thousands the magnificence and beauty of the Bald Eagle.