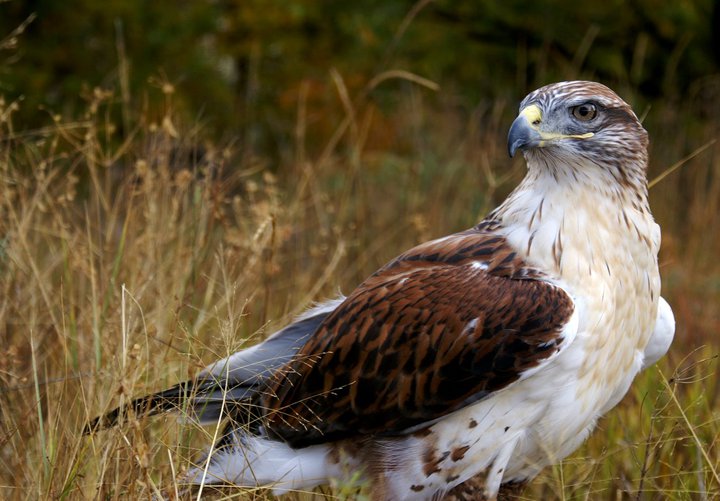 Raptors are not adapted to live in captivity, and only with concentrated, highly-skilled training will they become amazing Ambassadors to represent their species to the public. Raptors are wild creatures, and it’s a special individual that become an Ambassador for their species in a captive situation.

In 2003, the Colorado Division of Parks and Wildlife confiscated a raptor that had been illegally stolen from its nest as a downy chick. The young Ferruginous Hawk imprinted on humans as a result. Because of the imprinting process, the Ferruginous Hawk could not be released to the wild. She would never identify with wild Ferruginous Hawks for breeding purposes, and would always associate humans with food. This made her dangerous, as she would easily challenge and attack humans for food or resources.

Not all imprinted raptors become a threat to humans. Many simply won’t succeed in the wild. This particular Ferruginous Hawk became aggressive, learning to challenge humans for access to food.

So, although she was a healthy, beautiful young raptor, she was never to return to the wild.

RMRP took her on as an Educational Ambassador, hoping her tale could remind everyone to let wildlife remain wild. Imprinted raptors cannot return to the wild. This is useful in captive situations when rearing raptors to become Educational Ambassadors for their species, or to propagate future generations of endangered raptors for the survival of their species. In her case it took a perfectly healthy wild individual and removed her from the wild population.

Ferruginous Hawks are a Species of Special Concern in Colorado, meaning their populations are decreasing rapidly and widely.

Her story is a reminder to leave wildlife wild.

To support her care, visit the Adoption Page or leave a donation in her honor.