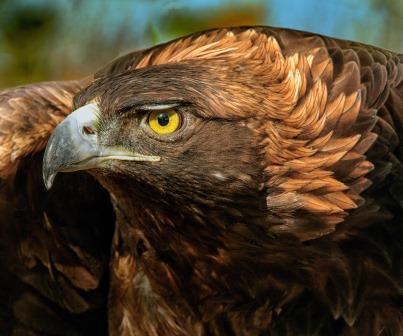 In August of 1994, a young of the year Golden Eagle was found at the base of a cliff. High above him, a Golden Eagle nest towered. The youngster’s right upper wing had been broken (the humerus). He was so very young, that the injury had either happened in the nest or during one of his first flights.

The Golden was brought to RMRP for rehabilitation. He received surgery and a steel plate to reinforce his broken bone. At the time, RMRP only had small flight enclosures, so the Golden Eagle was sent to another facility with large flight training enclosures in the hopes that he could once again return to the wild.

Despite all efforts, the young Golden never regained full range of motion of his right wing. He was returned to RMRP, where he was given a second chance at life in the form of an Educational Ambassador. He was an exemplary gentleman, and quickly took to his training. With grace, dignity, and an unending spark of wild passion, he has captivated audiences ever since.

To support his care, visit the Adoption page or give a donation in his honor.