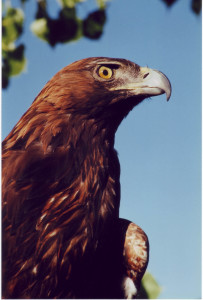 Sadly, we lost this bird in the fall of 2015. He had been fighting aspergillosis, a fungal infection. Due to his age he was no longer able to wage a fierce fight. Out of respect for his dignity and all his years with us, we opted to humanely euthanize him. He is sorely missed by hundreds of people who knew him. We leave his biography here as we continue to honor him and what he did to grow the RMRP's educational program. — December 2015

This Golden Eagle occupies a place of honor within the RMRP. As our first educational eagle, he has taught the staff, volunteers, and supporters of our program about strength and dignity. He was found in December 1987 near Red Feather Lakes, CO, by a group of hunters on horseback who came across a deer carcass that many raptors were feeding on. As the hunters approached, all but this eagle flew away. He wasn’t able to fly because he was missing the outer tip of his left wing. The cause of the injury is unknown—perhaps a high-speed collision with a fence line or a necrotic injury from high voltage trauma. The caring group of hunters gathered him up and packed him out on horseback and delivered him to the Rocky Mountain Raptor Program. Not able to ever achieve flight again, he became a permanently disabled Educational Ambassador with the RMRP. Since he came to us as an adult (at least five years old), we do not know exactly how old he is, but we do know that he is more than 32 years old, which exceeds the average lifespan in the wild of 25-30 years. 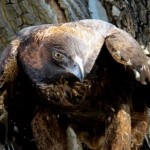 He was conditioned/trained to be an Educational Ambassador by the RMRP’s newly hired (at that time) director, Judy Scherpelz. Both the eagle and Judy are still our greatest leaders in the program. As a raptor that spent most of his years with RMRP, he was admired by hundreds of thousands and educated them about the wonders of our natural world. He played a vital role in training many highly skilled staff and volunteers to work with eagles, teaching us patience and focus. Even though he was in captivity for almost 30 years, he still maintained all of his wild dignity and strength He as always an apex predator.

What was most extraordinary about this magnificent bird was his underlying strength. His original injury easily could have been fatal, but he persevered, survived, and found food on his own until he came to us. Over the years he has had recurrent battles with aspergillosis (a fungal infection that affects the respiratory system), survived an infection of West Nile virus, and most at the end of his life, a type of encephalitic infection (all diagnostic tests failed to identify what it was). His amazing spirit and thrive against all odds let him rocket into a ripe, happy old age. The strength of spirit was his greatest lesson for all of us. He was truly a gift to all lives he touched through the RMRP. 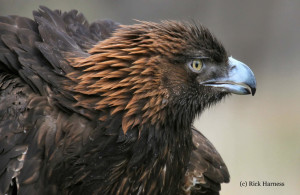