Most rescues are simple. It starts out as a phone call about a raptor that is on the ground with some sort of injury. We dispatch a rescuer. Bird comes in. Pretty simple.

Except when it's not.

Yesterday we received information about a Great Horned owl that had managed to get itself stuck at the bottom of a trench at an oilfield site near Fort Lupton, CO for at least a day. Initial reports were that the trench was about 4ft deep and a couple of feet wide. After several conversations with Mark Daley from Anadarko Petroleum it was determined that the trench was actually a locator hole that was 3 foot by 3ft and 10 ft deep. Without supported walls this was not a safe situation for a rescuer to enter. We then contacted Colorado Parks and Wildlife for their assistance in this rescue. They dispatched District Wildlife Manager Jason Duetsch to the scene. Jason used some ingenuity to fashion an extraction device out of a catch pole, a net and the solution to most problems.....duct tape. He was then able to fish the angry owl out of the hole and safely contain it a box for transport to our center.

During the admit the owl was found to be dehydrated, had abrasions to both eyelids and the wings 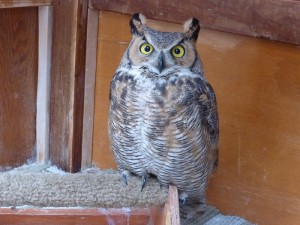 and tail coated in mud. After trying to escape the hole for over a day, the bird had surprisingly few broken feathers. After administering pain medications and subcutaneous fluids this unfortunate owl needed a warm bath to remove the mud from its feathers. Since the bird was very feisty and in stable condition, our triage team decided to bathe the owl immediately to assess the feather condition and avoid further damage that the dried mud might cause. Needless to say this was the last thing in the world this angry GHOW wanted. Luckily the mud had a high sand component and washed off easily. After a quick towel dry he was placed in a comfy cage with a heat disc in our Critical Care Room.

As of this morning the GHOW was cleaner, drier and certainly angrier than it was yesterday. 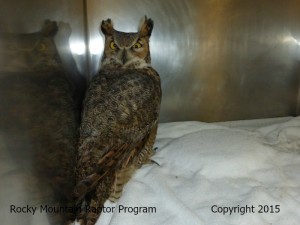