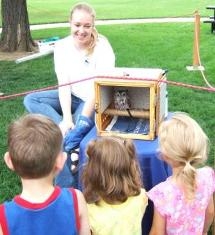 RMRP is proud to be a part of this fundraiser for The Northern Colorado Herpetological Society and Northern Colorado Wildlife Center, and we will be there with one of our Educational Ambassador Raptors for you to meet and greet. Silent … Read More
View Calendar
Add

Educational Ambassadors are raptors who have come into the center with injuries too severe to be released into the wild. These are very special birds that have shown us they can be around humans without being too frightened. It is not every bird that can handle this. RMRP evaluates each potential Educational Ambassador candidate carefully to make sure they will have a good quality of life during their time in captivity. Their well-being is paramount.

They spend their days as "teaching assistants," educating thousands of people a year about raptors, conservation, and the environment. Educational Ambassadors travel to schools, libraries, community events and more to share their stories and inspire the community.

Our educational male American Kestrel is smaller than most males. This is because he contracted West Nile Virus when he was still in the nest in 2012. This caused stunting of his growth and residual neurological issues that make it so he is not able to recognize prey in the wild. View the full biography. 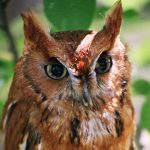 In 2007, this Eastern Screech Owl suffered an impact injury that broke his upper beak (creating a misalignment) and affected his vision in both eyes. He was in adult plumage when injured so we don’t know his age. He became a part of RMRP educational program in 2009 when he was transferred to RMRP from Auburn Alabama University's Raptor Center. View the full biography.

This beautiful little owl was brought to RMRP in July of 2020. Upon admission, he was found to have a broken jaw that already healed in an odd alignment. He was a very young bird and found near a road. It is probable that on one of his first solo explorations he was hit by a car. View the full biography.

In August of 1994, a young of the year Golden Eagle was found at the base of a cliff. High above him, a Golden Eagle nest towered. The youngster's right upper wing had been broken (the humerus). He was so very young, that the injury had either happened in the nest or during one of his first flights. View the full biography.

In June of 2002, a young of the year Golden Eagle was found in a drainage ditch in Weld County. This young bird had a rough start to life: she was diagnosed with curvature of the spine (scoliosis) and degenerative joint disease in the right elbow. She was unable to fly, and at her young age was deemed unable to survive in the wild. It was then her second chance at life began as an Educational Ambassador. View the full biography. 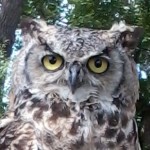 This bird came to the RMRP in 2012 after he was witnessed falling out of a tree in Casper, Wyoming. When he arrived at the center, he was close to death. He was unable to move his legs or see, was very lethargic, and seemed close to death. Each day, with supportive care, he became stronger and began slowly recovering from his head trauma. View the full biography. 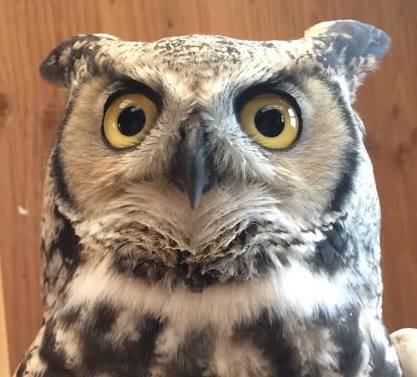 In 2018, a tiny baby owl fell from its nest. It suffered from severe head trauma and general body trauma. Unfortunately, all efforts to return this beautiful owl to the wild were not successful. It was found to not be thriving in a wild situation, probably due to the head trauma sustained as a chick. The young owl was brought back to RMRP for re-evaluation and was found to have probable cognitive inability to survive in the wild. View the full biography.

This beautiful Merlin was transferred to RMRP in 2019, but she began her journey at the Great Basin Wildlife Rescue in Utah in 2016. She was found with a badly broken left wing at the metacarpus (or wrist area). The bones were not only broken, but badly infected. To save her life, the very end of the wing was amputated. Because of the amputation, she would no longer survive in the wild. View the full biography. 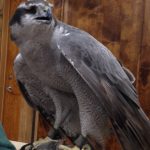 This Northern Goshawk was injured in February 2009 as a sub-adult.  Found in Kersey, Colorado, he had severe head trauma and a fractured right humerus (upper wing bone).  The head trauma left him with vision deficits making him non-releasable. In 2010 he molted into adult feather plumage and his eye color changed to the adult colored red. View the full biography.

This Red-tailed Hawk was found on the side of I-25 near Fort Collins in 1999.  He had sustained a fractured right clavicle & coracoid (shoulder area) and head trauma, which impaired the vision in his left eye. Because of this impaired vision, he could not be released. View the full biography. 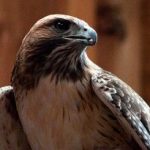 This bird came to the Rocky Mountain Raptor Program in August 2003. She was emaciated and showed neurological symptoms that were diagnosed as West Nile Virus.  The encephalitis (brain swelling) caused by West Nile Virus has left her with a neurological deficit that means she is missing some of the appropriate behaviors needed to survive in the wild.  View the full biography. 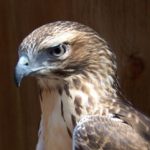 This Red-tailed Hawk came to the RMRP in 2010 from Snyder on the eastern plains of Colorado. He was a young bird just learning to fly when he was injured.  He had a broken right humerus (upper wing bone) and broken left ulna (lower wing bone).  View the full biography. 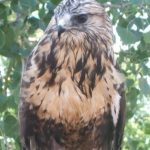 This Rough-Legged Hawk was originally an Educational Ambassador for the Laramie Raptor Refuge.  He was admitted in 2002 as a first year bird with severe head trauma probably due to being hit by car.    His injuries prevent him from surviving in the wild.  He was transferred to the Rocky Mountain Raptor Program in 2010 when the Laramie Raptor Refuge closed.View the full biography. 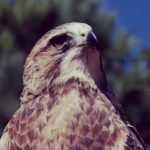 In August of 1997, this hawk was found in Cheyenne, WY as an immature bird.  She was admitted to our facility with severe head trauma and permanent damage to her left eye and ear.  Her injuries were probably caused when she collided with a vehicle.  Because of the vision deficit in the left eye, this hawk is unable to hunt well enough to be released.  View the full biography. 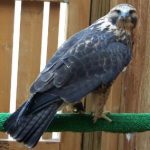 Injured in Northern Wyoming, this bird was transferred to the Rocky Mountain Raptor Program from the Teton Raptor Center in December 2011.  She had a broken right ulna (lower wing bone) that healed in an over-riding fashion preventing flight.  She was hatched in 2011.  Over the following year we got to watch her gradually molt in her adult plumage. View the full biography.

Mid-winter  1988, this Turkey Vulture  was found on the ground in Northern Colorado. Diagnostics revealed that he had an old, healed fracture of the left wrist and severe arthritis, which is often associated with old fractures.  This gives him a wing droop and makes it so that he cannot fly more than short distances.  View the full biography. 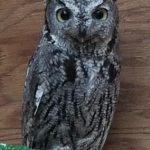 After being found tangled in garden netting in New Mexico in 2017, this Western Screech Owl was rescued by On a Wing and a Prayer. Her right leg was caught pretty badly in the netting, and she ended up with severe damage to her leg and toes, and even lost a couple of her talons. View the full biography.

In memorial of Educational Ambassador Raptors who have inspired thousands in their career at the RMRP, CLICK HERE.