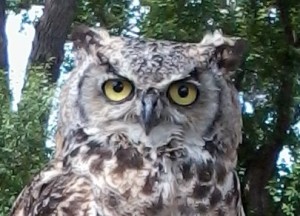 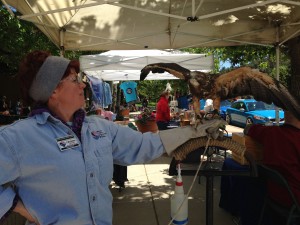 Join us for this Colorado classic in Estes Park Colorado.  Learn about Raptors and Elk.
View Calendar
Add 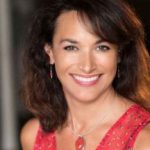 A Colorado native, Carin grew up in the shadow of Pikes Peak, seeing the beauty and purple mountain majesty every morning out the front window. That was the beginning of a life-long love affair with the outdoors and nature. Fort Collins has been like home to Carin far before she moved here. She spent many a summer in the Poudre Canyon with family, fishing, hiking, and watching the wildlife that is so abundant in the beauty of the canyon.

She finally made the move to Fort Collins and made her home here. She was proud to be a diver on the CSU WAC Championship Swimming and Diving Team, and spent a great deal of time on the slopes of Colorado honing her snowboarding prowess, which continues to be a passion.

Carin graduated from CSU with a BS in Microbiology and a minor in Anatomy and Neurobiology. While a student at CSU in 1999, she decided to volunteer at Rocky Mountain Raptor Program, having seen the program at the Colorado Renaissance Festival in Larkspur, and it didn’t take long before she was hooked. The beauty of the birds and the strength in their eyes was all she needed. She volunteered for two years, and then was a work-study student for the next two years. As a work-study student, she led the student volunteers and inspired positive changes in the program.

In 2003, Carin graduated and accepted the position of Education Coordinator. As a Certified Interpretive Guide, meaning that she has studied and is competent in communicating the emotional and intellectual connections between the interests of the audience and the meanings inherent in the resource, Carin has lead the RMRP education department to new heights and excellence in education.  Carin particularly enjoys speaking to audiences. She strives to touch their hearts and spirits by presenting the wonder of raptors, and teaching stewardship of our natural environment and its creatures.

Carin has also been involved in the medical care of the raptors, training volunteers, training the educational raptors, and all aspect of donor relations in the RMRP. She enjoys working closely with a dedicated and passionate staff and volunteers, wonderful people that have caring hearts and souls. All of this work has prepared her for taking on the position of Executive Director of the RMRP in October 2017.

Carin believes the every day work of the RMRP is magical. She feels she has an obligation to the raptors and to the public, and truly enjoys giving of herself to ensure the future of wildlife and wild places. 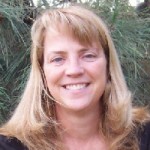 “In nature I find the inspiration to work toward a better world. I hope that the RMRP will open the eyes of those who meet us and inspire them to look within and be the difference!”

Raised in a rural suburb of the Chicago area, Judy gained an appreciation for wildlife by realizing how fleeting and precious it is in some areas. She grew up camping and hiking with her family in Illinois and Wisconsin.

She attended Luther College in Decorah, Iowa, receiving a B.A. in Biology. She then attended the University of Missouri in Columbia, living on a state wildlife area on the northern edge of the Ozarks, with wild turkey and grouse and loons outside her window. She spent most of her graduate student life in the cypress swamps of southeastern Missouri, studying wood ducks in the flooded hardwood bottomlands.

After completing her graduate studies, she moved to Colorado in 1979, and had a variety of work experiences with state and federal agencies and environmental consulting firms, conducting wildlife surveys, developing literature surveys, writing environmental impact statements, and working as a technical editor.

She was hired as the first Executive Director of the Rocky Mountain Raptor Program in 1987, with the charge to guide the organization through the transition from a student club into a community organization, developing a volunteer program, community education program, and fund raising strategy. Judy’s leadership has taken the program from a small student club to the leading raptor rehabilitation and education facility in the region. She enjoys teaching about all aspects of raptor biology and behavior.

She has one son, Adam. In her spare time, she enjoys hiking and exploring the fiber arts through weaving and knitting. 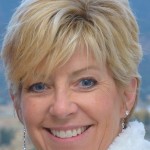 Dyanne Willow has an M.S. in Pure Mathematics from Northern Illinois University and has taught at colleges in Michigan, Illinois, and Colorado. She obtained her real estate license in 2010 and has worked at RE/MAX since 2011.

Upon moving to Fort Collins in 1999, Dyanne discovered the RMRP booth at New West Fest and fell in love. She signed up for the next orientation with her daughter a month later and never looked back. After volunteering at the RMRP for 12 years and taking on a vast variety of volunteer duties from rescuing raptors in distress to training new volunteers and creating training videos, Dyanne's job as a realtor started consuming her volunteer time, so she had to cut back to just being on the board at the RMRP.

Susan has been an active volunteer at RMRP for many years, along with her husband, and two children who have since graduated and moved on to new adventures. Susan is a staple in the Educational department of the RMRP, helping to reach thousands of people each year with our message.

If you love the mission of RMRP and are interested in becoming a board member, please contact Executive Director and Board Chair Carin Avila at Carin@rmrp.org.