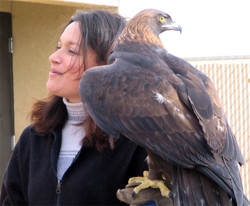 “I hope that when my life is spent, I will look back at those I touched, feathered and human alike, and the question of ‘Did I make a difference?’ will echo with a resounding ‘YES’. For in the end it is not the number of breaths we take but the moments that take our breath away. The RMRP has taken my breath away in many ways!”

A Colorado native, Carin grew up in the shadow of Pikes Peak, seeing the beauty and purple mountain majesty every morning out the front window. That was the beginning of a life-long love affair with the outdoors and nature. Fort Collins has been like home to Carin far before she moved here. She spent many a summer in the Poudre Canyon with family, fishing, hiking, and watching the wildlife that is so abundant in the beauty of the canyon.

She finally made the move to Fort Collins and made her home here. She was proud to be a diver on the CSU WAC Championship Swimming and Diving Team, and spent a great deal of time on the slopes of Colorado honing her snowboarding prowess, which continues to be a passion.

Carin graduated from CSU with a BS in Microbiology and a minor in Anatomy and Neurobiology. While a student at CSU in 1999, she decided to volunteer at Rocky Mountain Raptor Program, having seen the program at the Colorado Renaissance Festival in Larkspur, and it didn’t take long before she was hooked. The beauty of the birds and the strength in their eyes was all she needed. She volunteered for two years, and then was a work-study student for the next two years. As a work-study student, she led the student volunteers and inspired positive changes in the program.

In 2003, Carin graduated and accepted the position of Education Coordinator. As a Certified Interpretive Guide, meaning that she has studied and is competent in communicating the emotional and intellectual connections between the interests of the audience and the meanings inherent in the resource, Carin has lead the RMRP education department to new heights and excellence in education.  Carin particularly enjoys speaking to audiences. She strives to touch their hearts and spirits by presenting the wonder of raptors, and teaching stewardship of our natural environment and its creatures.

Carin has also been involved in the medical care of the raptors, training volunteers, training the educational raptors, and all aspect of donor relations in the RMRP. She enjoys working closely with a dedicated and passionate staff and volunteers, wonderful people that have caring hearts and souls. All of this work has prepared her for taking on the position of Executive Director of the RMRP in October 2017.

Carin believes the every day work of the RMRP is magical. She feels she has an obligation to the raptors and to the public, and truly enjoys giving of herself to ensure the future of wildlife and wild places.