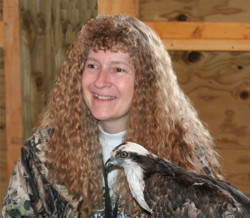 “Raptors and raptor medicine are my passion! Every bird that passes through our hands teaches a lesson and touches someone somewhere. Rocky Mountain Raptor Program has allowed me to make a positive difference in this world, one life at a time!”

Gail's interest in animals first took her to the field of veterinary medicine as an assistant to several local veterinarians, where she developed a special interest in exotic animals.

After taking RMRP's Birds Of Prey class, Gail became a volunteer in 1989. As her love of raptors grew, and she continued to learn about veterinary medicine, Gail became RMRP’s Medical Coordinator on a volunteer basis. Six years later, in 1997 she was hired into the position full time.

Gail is responsible for the medical management, food procurement, and housing of all active case raptors and permanent educational ambassadors. Her duties also include medical training of the volunteers, overseeing various research projects, and reporting to state and federal wildlife agencies.

In her spare time, Gail enjoys being in the outdoors watching birds and other wildlife, hiking, camping, and relaxing at home with her furry and feathered menagerie.

“Climb the mountains and get their good tidings,
Nature’s peace will flow into you as sunshine flows into trees,
The winds will blow their freshness into you, and the storms their energy,
While cares will drop off like autumn leaves.” ~ John Muir