This beautiful Merlin was transferred to RMRP in 2019, but she began her journey at the Great Basin Wildlife Rescue in Utah in 2016. She was found with a badly broken left wing at the metacarpus (or wrist area). The bones were not only broken, but badly infected. To save her life, the very end of the wing was amputated. Because of the amputation, she would no longer survive in the wild.

Her first home as an Educational Ambassador was at The Urban Interface in Texas, where she was a crowd favorite.  The Urban Interface had to tragically shut their doors in 2019, and began looking for placement for their Ambassadors. The RMRP was grateful and supremely excited to be chosen as her new home.

Thank you to Melinda Jordan, and Don Dolce, Certified Flight Instructor, and an anonymous donor who flew Executive Director Carin Avila to Texas to retrieve this regal little falcon and bring her to Fort Collins.

She spend the end of 2019 and the beginning of 2020 learning her new home and fun new skills as she settled into her roll as Educational Ambassador at RMRP. She made her debut in early 2020, and has continued to reach for the sky since then!

You can Adopt this beautiful Merlin, or contribute to her care through a donation. 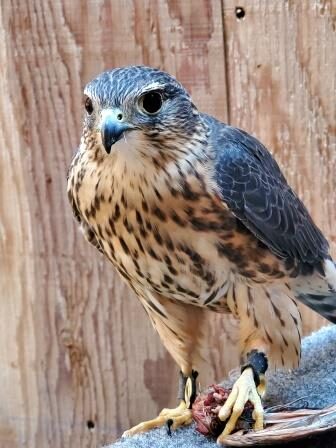