Baby season is in full swing and we are off to a record setting start. We have admitted 24 immature Great Horned owls (21 still in house) weighing from 140 grams to over 1300 grams upon admission. With a mild winter and plenty of available prey, the Great Horned owls in our area have been very prolific. Most nests have three kids in them with four not being an uncommon number. Traditionally the young GHOW’s that come into us are either due to weather related nest failures (snow, high winds), fall out of their nest trees before they are able to fly/climb back up into the tree or when nests are accidentally destroyed by humans.

Sometimes we can reunite youngsters with their parents by placing a surrogate nest in the form of a large wicker laundry basket, back up in the original nest tree or nearby tree. The basket is securely anchored up in the tree and the kids placed in the nest. We will then observe the nest for several days to make sure the adults are caring for the kids. We will only do this if the adults are still near the original nest tree. If the youngsters are a little older and not yet flying (branching stage), we will use a ladder and climb high enough to place them on a branch, out of harm’s way and let mom and dad take over.

Great Horned owls do not build their own nests. Since they nest much earlier than other raptors here, they get their pick of locations. They will take over nests made by hawks and other large birds, squirrel nests, cavities in large trees and even naturally eroded cavities in rock cliffs.

However, there has been a trend over the last several years in our area where GHOW adults are taking advantage of human provided nest sites. Much of our modern architecture provides many suitable locations for expectant owl parents to take up residence to raise their young. Especially here in northern Colorado where our natural areas closely border and mix with our daily lives. Many times these locations lead to owl/human conflicts that might necessitate the removal of the young. In these situations there is no re-nesting option and the young owls have to come in to us.

The RMRP has received 10 young owls from 3 different nests under these circumstances this year. Two of the nest removals were due to people being attacked with one person suffering a serious eye injury. Female GHOW’s are very attentive/protective mothers and are a force to be reckoned with. No malice involved, just mom being mom.

So, what the heck to we do with all of these young Great Horned Owls?

First they get massive amounts of nutritious food to help them grow strong bodies and feathers. This usually means lots of mice and rats. If they are too little to eat on their own, our rehabilitation staff then gets to garb up in camouflage outfits with nature sounds playing in the background while they hand feed the kids with hemostats until they can eat on their own. A GHOW “mom” puppet is always what the kids are looking at while the food magically appears to fill their hungry tummies.

Older kids are then placed in an outdoor enclosure with our permanently disabled and non-releasable adult GHOW that we are permitted to keep by the USFWS for use as a foster parent. Once they begin to fly, they are transitioned to one ( or two or three) of our flight conditioning enclosures where over the summer they will become skillful flyers, get prey tested on live rats and prepare for a life in the wild.

Unlike many other raptor species that are fairly autonomous after they start flying and hunting, GHOW kids are pretty dependent on their parents until very late summer and into the fall. If they have difficulties venturing out on their own and the hunting isn’t going so well, the young owls will come back to the home territory and food beg to mom and dad. Mom or dad will quickly respond by bringing them a meal of a fat vole or squirrel. GHOW kids aren’t much different than college students in this respect. Except owls don’t bring home their laundry! 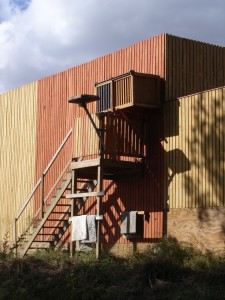 How do we fill that void? We do it by using a proven technique called the soft release or “hacking”. Our hack box system consists of a small wooden cage that is attached to the outside of a flight enclosure near the roof. The hack box has two sliding doors, one to the inside and one to the outside. When a group of GHOW kids (no more than 5 at a time) has gone through (2) rounds of live prey testing (which is 1 rat per bird x 5 days per round. You do the math) they are then ready for hack box training. For the two weeks prior to release we drop food for the owls up in the hack box with the box closed to the outdoors and open to the inside flight enclosure. During this period the owls get used to finding their food in the hack box. On the night of the release we drop the food in the box and open the hack box to the outside. Overnight the young GHOW’s venture into the great outdoors to begin their life in the wild. Early the next morning the door to the hack box is closed and the enclosure is then cleaned for the next group to move in. We generally try to hack out all of the young GHOW's in our care by October 1, so they have some time in the wild before winter weather sets in.

Our job does not end there.

To simulate the food providing role of the parents, we have an exterior feeding platform that is attached to a telescopic pole next to the hack box. Every evening we will drop an appropriate amount of food for the newly released owls, extend the pole upwards to keep the food out of the reach of marauding raccoons. This platform then provides free meals for these owl kids until they learn to make a living for themselves.

Since the implementation of this system, the number of band returns (See previous blog post on the importance of banding birds prior to release) on newly released hatch year Great Horned owls that die, has greatly decreased. While this system is very labor and resource intensive, we believe this gives these young owls the best chance at survival in the wild.