The mornings are cool and crisp.  The leaves are changing color.  Fall is definitely in the air.  With the change in seasons comes a change in the type of cases and the species we see too.  The summer migrants have left the area.  At the end of August, we were happy to send 16 Swainson’s hawks that were in our care off to begin their migration to Argentina.  These youngsters were released into the gathering Swainson’s hawk family groups to learn the way to Argentina from the adults.  The craziness of the summer is winding down but we are still busy.  Migration is under way and birds are on the move.  October has brought us 16 birds in about as many days.  Downy babies and West Nile virus have been replaced by immature birds stressed by drought conditions, colder night temperatures, and the absence of easily caught prey (grasshoppers).  These conditions test their newly developed hunting skills and many become thin, weak and unable to fly or are forced to hunt on the side of the road, increasing their chance of being hit by car.  Many of these birds come to us broken beyond repair and must be humanely euthanized but there are those that against all odds are recovering.  Here is one of those amazing patients:

Case # 12-217:  A Northern saw whet owl admitted on October 9th from Longmont.  The bird had been hit by a car traveling along the highway at highway speeds (~60 mph).  The bird was alert but had bruising along the entire front of its body.  Thankfully, there were no broken bones.  It is amazing that a 90 gram bird can tangle with a car and come out alive!  After emergency care and spending the night in our oxygen cage, the bird was much more alert. 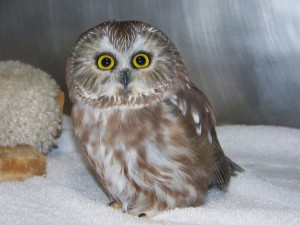 It moved into a small cage in our critical care room to continue  its rest and recovery.  After a few days the saw whet was very active, all attitude, and apparently feeling a lot better.  It moved outside to a small flight cage on October 13th to continue its recovery. 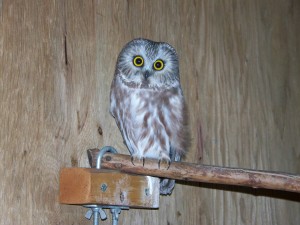 After a week of flight time, release day is here!  The bird was released for a second chance at freedom on October 19th and flew away so fast its release picture was only a blur!