As the current outbreak of High Pathogenic Avian Influenza (HPAI) continues its North American expansion, the RMRP has been forced to make further changes to how we operate in preparation for the eventual appearance of HPAI in northern Colorado.

As mentioned in a previous blog post (The RMRP Prepares for Avian Influenza), RMRP staff has been closely monitoring the outbreak since December when it began in British Columbia. At that time we began planning enhancements to our existing bio-security protocols and to determine at what point those enhancements would be implemented. In Mid-March RMRP Rehabilitation Director Gail Kratz and Rehabilitation Coordinator Michael Tincher attended a workshop hosted by the Colorado Department of Agriculture. The workshop confirmed much of what our staff already aware of and that our plan of action was consistent with already established standards. We decided that if HPAI was detected and confirmed within 150 air miles of Fort Collins, our enhanced bio-security protocols would then be implemented.

Unfortunately our wait was a short one and too close for comfort.

Several days later HPAI was confirmed in a Canada goose near Cheyenne, WY. Since the HPAI virus is shed in the feces of infected birds (mainly wild waterfowl at this time) and can be transferred from place to place on inanimate objects (fomites), we began the immediate use of disinfectant foot baths to minimize the risk of bringing the HPAI virus in to our facility. While our main center fortifications had been improved, that was only part of the battle.

We have a satellite facility on property that is owned by Colorado State University that is located on the east side of Fort Collins. The Environmental Learning Center has long been the home to several of our non-releasable Educational Ambassadors. Four of our Educational eagles and four of our hawks have been the most recent residents. This location is open to the general public from dawn to dusk every day and affords people the opportunity to see raptor up close since our main center is only open to the public on certain days of the year and special tours. This public venue has been a very important part of our program. This property is located along the Poudre River with several natural areas nearby with numerous ponds and wetlands. Unfortunately with water you get wild waterfowl that have the potential of being infected with HPAl.

The ELC enclosures are in a natural setting with trees surrounding and encroaching on the complex. This coupled with the lack of walkways, sanitary drains and related infrastructure that could easily be disinfected; we were left with only one practical and painful decision. We needed to move the birds to our main center.

While we already house many our Educational raptors at our main facility, the one thing that we lacked was additional enclosures in our Educational bird complex to accommodate the birds from the ELC. Housing them long term in one of our rehabilitation complexes was not an option due to the need for keeping the educational and rehab birds segregated. Our only option was to renovate and expand the existing enclosures. We immediately began planning this move and organizing work crews and materials to make this happen.

The logistics of this at the present time has offered many challenges. We needed to move the ELC birds immediately and place them under a preventive quarantine. While they didn’t show any signs of being ill, we needed to use best management practices in moving them. The birds were moved to our main facility and samples (oral/cloacal) taken from them to be submitted to the diagnostic lab at Colorado State University for HPAI testing. They were then placed in separate enclosures under quarantine conditions that would last for 21 days. After the 21 days they would be tested again. If they were HPAI negative the birds would then be moved to their new homes in our Educational raptor complex.

Their initial tests came back negative for HPAI. This didn't surprise use since they appeared to be healthy and HPAI infection results in very sudden illness and death in raptors. Their re-test will be later this month and we are hoping for the same result. If they are HPAI negative at that time, those raptors will go back to work educating people about raptors and raptor conservation.

In the meantime we are under an extreme housing crunch! The number of birds under rehabilitation has grown quickly over the last month. Most of the new cases are immature Great Horned owls (23) that are putting a huge strain on food and space resources. Mother Nature hasn’t helped in the least bit with all of this wet weather which has slowed down our ability to work on the enclosures. 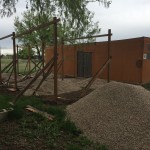 This outbreak of High Pathogenic Avian Influenza is decimating commercial poultry flocks in the Midwest and doesn’t show any signs of slowing down yet. The overall impact to raptor populations are yet unknown as it is hard to track them due to a relatively solitary lifestyle for most of the species. There is hope that with hotter,drier conditions that come with summer, the outbreak will subside and bring some relief to poultry producers, state and federal agencies that have had to deal with the brunt of this ordeal. We have dodged the bullet so far in Colorado. However, when summer ends and migration for hundreds of thousands of waterfowl from the breeding grounds of North America begins, and they move south to their wintering grounds, will we be fortunate enough to avoid this scourge or will it hit our lives just as hard as it has done to other areas of our country?

The RMRP has decided that hope is not a strategy. We will be armed with science, knowledge and fortitude to battle this new threat to these magnificent creatures that we have chosen to defend.