We admitted a young Osprey was on 7/21 after it was found on the ground near its nest just northeast of Fort Collins,CO. The bird was emaciated and suffering from a strangulation wound to the lower left leg that was extremely necrotic, leaving the leg nearly amputated. The wound was caused by a large tangled mass of baling twine that had been brought to the nest by the parents and used as nesting material that had accumulated over time. The wound was old and had taken several weeks to reach this advanced state of necrosis. The left leg above the wound was also swollen and infected. Unfortunately, due to the nature and severity of the injury our only option was to humanely euthanize this youngster. 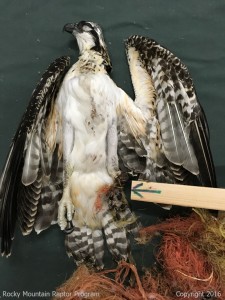 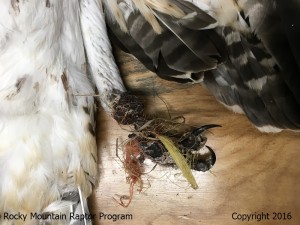 Discarded baling twine is a very real and widespread problem with Osprey. These raptors are attracted to the varied colors of twine and find it very appealing as nest material. Once incorporated in the nest it becomes an indiscriminate snare waiting for the next unfortunate victim, young or old.

Nesting platforms in our area have become plentiful since the 1990’s and the Osprey are taking full advantage of them. Some have been installed as part of Operation Osprey, others in order to give these adaptable fish hunters an alternative to nesting on power poles that endanger our electrical infrastructure and themselves. Some homeowners have even taken to erecting new homes for these birds in suitable locations to help expand nesting opportunities.

The problem comes when these nesting platforms aren’t maintained and cleaned up on an annual basis. The more accumulated baling twine, the greater the risk of entanglement. The enterprising Osprey parents also bring other materials to the nest such as nylon straps, fishing line, plastic (of various types) with our favorite being a headless Barbie doll. Go figure.

In our experience the baling twine is by far the most deadly. We have been involved in many rescues involving Osprey hanging upside down from the nest with a leg(s) entangled in baling twine. One such rescue was a youngster dangling upside for several hours and before a rescue could be executed, the twine broke loose with the kid falling to the ground and breaking its neck.

What can be done about this problem? There are a couple of solutions that stand out. Number one is to annually clean out the nest platforms. There is a several month window from October to the end of March that these nests can be accessed and cleaned out. This time period coincides with the Osprey departure for warmer climes in October and before their return for nesting season in April.

We work closely with our partners at Colorado Parks and Wildlife, Poudre Valley REA, Excel Energy and EDM International to keep the dialogue open about when to get these nests cleaned out. Apparently we need to work a bit harder to make sure our efforts are able to accomplish this task in a more timely fashion in the future.

The other solution is for everyone that uses baled straw/hay for their animals to be vigilant about policing their property for discarded twine. This isn’t just the responsibility of the farmer or rancher. Everybody that has a horse, cow, llama, alpaca or uses it for a straw bale garden or to use it for mulch is needed to help eliminate this problem. My guess is that if you are reading this then you care about our wildlife and these wonderful chirping raptors.

Please pick up and properly dispose of your baling twine when you are done with it. Re-purpose it in the garden to tie up tomatoes or tie up other miscellaneous items or better yet, recycle it!

The Fort Collins Conservation District has Twine Recycling program that specifically provides an outlet for all of your unwanted baling twine (http://www.ftcollinscd.org/programs/baling-twine-recycling/).

Young raptors already have a difficult time surviving in the wild during their first year, so let's work together to give them a fighting chance make it out of the nest and take on the world the way nature intended. mt