Hosted by Stephanie at RE/MAX Alliance, come enjoy snacks, drinks, drawings and grab your PIE!! And of course to support birds of prey at RMRP! RSVP REQUIRED: -Like their Facebook Page (https://www.facebook.com/SWRealtyTeam) and send a message asking to RSVP. -Send … Read More
View Calendar
Add 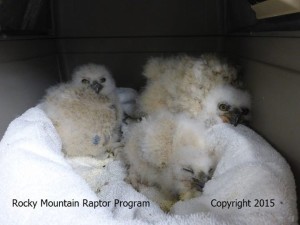 Spring has sprung. Returning birds are chirping, plants are sprouting, warm breezes enliven us and the return of the sun brings joy; at least for all us humans.  For birds, the hardwired instinct to find a mate, build a nest, copulate, lay eggs and invest all energy into the success of those eggs is the overwhelming drive.  For most of the raptors they invest a lot of time meeting this instinctual drive.  Great Horned Owl pairs will spend about 8 to 10 months doing this.  Swainson’s Hawk pairs will spend about 7 months plus they have the increased stress of migration, both north in the spring and then getting the young ready to head south in the fall.

Every day for these birds may be a life or death struggle for survival.  This may include fighting off other species of raptors for their territory, or nest, or even their mate.  It may include fighting off other predators like raccoons, skunks or humans.  Humans as predators?  What? I will get to that in a minute. The male raptors daily life includes hunting enough food to feed himself, his mate and any young, once they hatch.  That is a tall order and is dependent on weather, territory available for the food animals to thrive, diseases in the food animal population, and competing with any other animals also hunting the same food.  The female raptor also has a difficult job. Her job is to keep the eggs warm, to turn them when her internal instinctual clock tells her to, and protect the eggs, herself and the nest from any potential threat.  It may look like it’s easy to just lie on the nest all day, but it isn’t.  She is ever vigilant of anything that may be a threat to her or her progeny. She must be alert, even at times when she would normally be sleeping.  And then there are the vagaries of weather to deal with.  Wind, late spring snow, heat before the trees have leafed out to provide cooling shade, rain, hail and more can weaken the parents or damage the eggs or young.   A severe weather event at any time while the birds are tied to the nest can be potentially devastating. 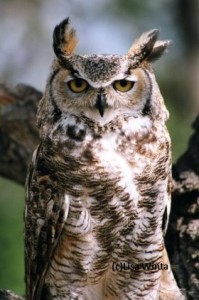 So let’s get back to humans as predators. What could I possibly be talking about?  Well, most humans are not out to purposefully hunt and kill raptors or their eggs.  Of course we all know that would be illegal per the Migratory Bird Treaty Act.  What happens though is many humans unwittingly put these birds lives in peril by not understanding the stresses and needs of these nesting birds.  Do humans stalk them like a predator would? Well, yes, we often do with our cameras and binoculars.  It is cool to see these beautiful magnificent birds up close. It brings out the ooh and the aah in us when we see the young birds.  But we so easily forget how difficult it is for these birds to survive.  Most humans don’t have a real feel and understanding of the stresses that these birds deal with daily, hourly, and minute by minute.

For many a raptor, our mere presence within their territory increases the stress they experience. They don’t know we mean them no harm. They view us as a predator that may be a threat to their nest, their eggs or their life.  Resting pattern is disturbed, heart rate increases, the body prepares for potential battle.  I would imagine it would be kind of like how you feel  if you are a person afraid of public speaking (this is one of the most common human fears) having to go up on a stage in front of 100 of your peers.  You might feel “butterflies” in your gut, clammy palms, sweating, fear, maybe even some heart palpitations.  This is how the body manifests stress.  For the raptor, that stress of preparing for potential battle is a metabolic drain that can affect their ability to survive.

Complicating matters is that the buffer space that each species and even each individual needs is different.  What the Robin in our backyard tolerates is very different than what a nesting hawk or owl will tolerate.  Colorado Parks and Wildlife has a very nice document, found here -https://cpw.state.co.us/RaptorBufferGuidelines, to help people understand some of the buffer we need to provide the raptors.  We aren’t talking a few dozen feet here, we are talking ¼ mile to a mile depending on the bird.  Whatever the distance, if the bird is alerted to your presence, you are too close. The opening paragraph of the document touches on some of the variability for each bird.

Tolerance limits to disturbance vary among as well as within raptor species. As a general rule, Ferruginous Hawks and Golden Eagles respond to human activities at greater distances than do Ospreys and America Kestrels. Some individuals within a species also habituate and tolerate human activity at a proximity that would cause the majority of the group to abandon their nests. Other individuals become sensitized to repeated encroachment and react at greater distances. The tolerance of a particular pair may change when a mate is replaced with a less tolerant individual and this may cause the pair to react to activities that were previously ignored. Responses will also vary depending upon the reproductive stage. Although the level of stress is the same, the pair may be more secretive during egg laying and incubation and more demonstrative when the chicks hatch.

Each of us humans have no idea whether each of those birds is one that is more tolerant or less tolerant, is a new mate, or a first year breeder and so on.  We are also unlikely to know what other stimulus those birds have been dealing with. Perhaps a raccoon had climbed the nest tree the previous night thus leaving the parent more fatigued and hyper sensitized to encroachment.  It isn’t easy for these birds.  It is a daily struggle simply to survive. 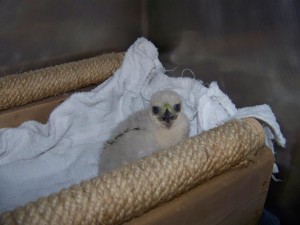 We are so lucky in Colorado to live in a state that has so much wildlife around us.   We all love raptors.  We all must do our part to make sure all this wildlife stays healthy around us.  During nesting season, that means we all have a responsibility to allow them their homes and the space they need.  If you want to see cool nesting birds and the neat stuff that happens with the young in the nest you can do it on-line.  Many nest cams have been installed all over North America, making it possible to see those cute little babies without causing them intrusive stresses.  Xcel Energy offers several at this web address - http://birdcam.xcelenergy.com/.  If you are bird watching in the wild, invest in a good spotting scope or high powered binoculars.  With the right optics you can view the nests from long distances without alerting the birds.  After all, what is more important? Seeing the bird up close?  Or allowing that bird to live and thrive?  And maybe, if all goes well, and each of us does our part, many more generations of those beautiful winged wonders will be gracing our skies. 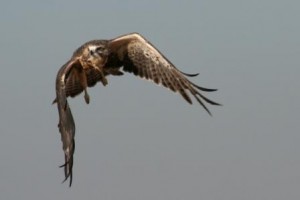