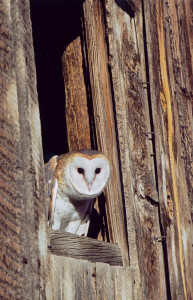 With his white chest and heart-shaped facial disk, our beloved former Educational Ambassador Barn Owl was an eye-catching sight at exhibits and programs. He came to the RMRP in 2000 with a shattered right humerus (upper wing bone) after being found alongside a roadway north of Fort Collins. Although the bone healed, the extent of the damage to the bone didn't allow him to have the range of motion he needed to fly.

After joining the RMRP, this Common Barn Owl has served as a foster parent to orphaned baby Barn Owls that needed a role model of their own species when raised in our care. With him as their model, they developed natural behaviors common to this species. He fed the orphans like they were his. He raised well over 100 orphans throughout the years, all of which were successfully returned to the wild. As an Education Ambassador, he attended hundreds education presentations at schools and public outreach exhibits around the state.