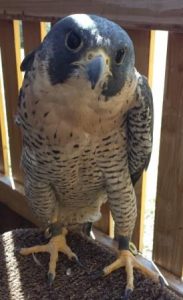 This Peregrine Falcon came to us from Eaton, Colorado in 2000 as a second-year bird (which we could tell from the blue-ish color on her cere and feet). She was the unfortunate victim of high voltage electric shock from a power pole.   Her right wing and left foot were the contact points for the electricity. When she was admitted to RMRP, her right wing was necrotic, meaning the tissue was dead or dying. The extent of the injury required a full-wing amputation. We received special permission from the US Fish & Wildlife Service and Colorado Parks & Wildlife to do the full wing amputation. Because it can sometimes be hard for birds to lose an entire wing and still have balance, this special permission is required in order to make sure the bird can adapt.  Due to her young age when her wing was amputated, this peregrine falcon has adapted well to life as a one-winged bird. At the time of her injury, Peregrine Falcons were on the endangered species list, which made her an important educational ambassador.

Formerly called the “duck hawk,” this famous falcon species has a worldwide distribution, mainly in arctic to temperate areas.  Peregrinus is Latin for “wandering,” referring to the falcon’s long-distance migrations and dispersals.  This species is also the fastest animal on earth. They can reach speeds in excess of 200 miles per hour when in a stoop (dive) after their prey, which usually is some type of bird. 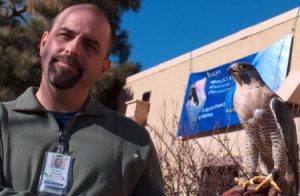