In August of 1997, this hawk was found in Cheyenne, WY as an immature bird.  She was admitted to our facility with severe head trauma and permanent damage to her left eye and ear.  Her injuries were probably caused when she collided with a vehicle.  Because of the vision deficit in the left eye, this hawk is unable to hunt well enough to be released.  The eye has since deflated.

This bird gave us a surprise in Spring 2018. We had assumed this was a male bird based on weight. In raptors males are smaller than females. For almost 20 years we referred to this bird as him. But, surprise! It's a girl. In Spring of 2018 she laid an egg for the first time ever. It wasn't fertilized since she doesn't live with another Swainson's Hawk. It probably surprised her as much as it surprised us.

This species was named for William Swainson, a British naturalist. The classic Swainson’s plumage sports a dark bib and hood, light belly, buffy underside of the wing, and silver primaries and secondaries (feathers on the trailing edge of the wings). Though known for the distinctive dark head plumage and light undersides, they may have dark gray, reddish, or almost black plumage. 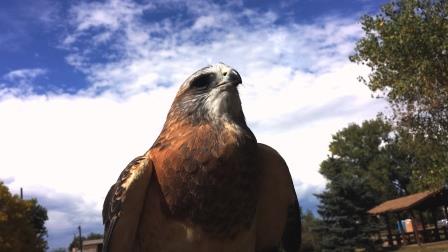