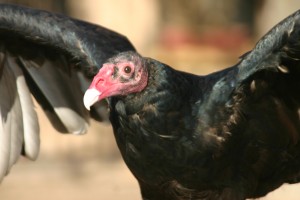 This Turkey Vulture was admitted mid-winter of 1988.  In early fall,  Turkey Vultures migrate from Colorado to the gulf coast and into South America.  So when RMRP received a call in mid-winter about a Turkey Vulture on the ground in a pasture, we already knew he was in trouble. Diagnostics revealed that he had an old, healed fracture of the left wrist and severe arthritis, which is often associated with old fractures.  This gives him a wing droop and makes it so that he cannot fly more than short distances.  In addition to their yearly migration, Turkey Vultures may fly hundreds of miles per day to find dead things to eat.

Unlike the other raptors we care for, Turkey Vultures do not actually kill their own food. They use their keen sense of smell and great vision to scavenge carcasses.  This bird came in with adult plumage, so we are not certain about his age- but we do know he is over 30 years old!

Turkey vultures are known to be intelligent, shy, and mischievous creatures. This bird, although having been with us since 1988, is no exception to this.   As an educational ambassador, he teaches people that Turkey Vultures are not only beautiful up close, with their iridescent feathers and vivid red heads, but they are important garbage collectors of the world. At every event he attends, this bird fosters appreciation for the numerous, amazing adaptations vultures have evolved. He has grown a loyal following of fans throughout Northern Colorado.

Turkey vultures are large, brownish-black birds that typically soar and glide with their wings in a V-shaped position. Especially on sunny days, the back and neck feathers have a purplish iridescence. The underside of the wing appears silvery with black coverts. Because of the red skin of the head and the dark body feathers, the turkey vulture was named for its resemblance to the turkey. Immature turkey vultures have similar plumage, but their head coloration is dusky black.