Take a drive around northern Colorado  and you will see raptors everywhere.  Red-tailed Hawks seem to be on every other power pole as you drive down I-25. Rough-legged Hawks enjoy their winter hunting in 50 degree temperatures, far different from the bitter cold and snow that covers their summer nesting ground in the far north. American Kestrels can be seen hovering around the edges of farm fields hunting mice and voles. Great Horned Owls claim nest sites for baby season that will start soon.

Our mild winter and its lack of snow cover might be bad for local water supplies come summer, but it is a boon to the local raptor populations and their ability to find food. Open fields provide better hunting opportunities. Snow cover forces more raptors to hunt near snow free areas like roads bringing them into harms way more frequently. Open cover also greatly benefits the first year raptors (hatched in 2012) which traditionally have a higher mortality rate in their first winter due to lack of experience.

All of this equates to a lighter caseload for our rehabilitation staff and volunteers.  January has brought us only four birds, an all time low! Our first bird of the year came in on January 12th.  An adult Bald Eagle from the Wheatland, Wyoming area that on admission was emaciated, had an elevated lead level, a droop to the right wing, and an injury to its left eye. The bird has been steadily gaining weight and has been treated for lead poisoning with a chelating agent. The blood lead level is getting much closer to an acceptable level and the bird will be moved to a larger outdoor recovery enclosure to assess the use of its right wing. 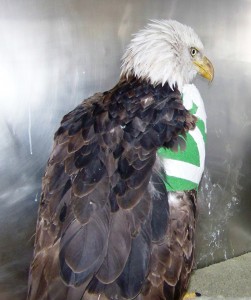 On January 18th, we admitted a first year Coopers Hawk from the Greeley area. She was a probable window strike victim resulting in head and spinal trauma. Unfortunately, despite emergency care, the bird died a few days later.

On January 20th,  an adult male American Kestrel was admitted from Fort Collins with a fracture of the left ulna (wing). After stabilizing the wing, cage rest and good food (mice) the fracture has healed and the bird has been moved out to our recovery complex for further assessment. 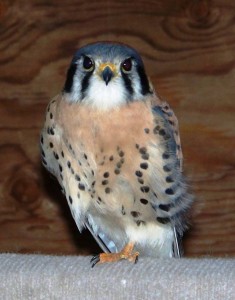 The last bird of January was an adult Red-tailed Hawk from just east of Fort Collins admitted on January 27th. The bird was underweight and had an old injury to the right carpus (wrist). No fractures were found, but the abnormal mobility at the wrist joint indicated a problem with tendons or other soft tissues. Unfortunately, the bird developed respiratory and gastrointestinal problems and died a few days later. The necropsy showed a torn tendon on the right wing and aspergillosis (a fungal infection).

While the incoming caseload might be light, there is still plenty going on around the center. We  have the dozen or so patients still in rehabilitation from 2012 to care for.   January is the time to catch up on paperwork and finish the annual reports to our state and federal permit agencies.  We are organizing our freezers and placing food orders to make sure we have food supplies for the patients to come. In a busy year we can go through 4 tons of food.  That is a lot of mice, rats, rabbits, chickens and fish! This down time also allows us to work on our recovery and flight enclosures  making sure they are in good repair. When weather allows we are hosing and scrubbing, recovering perches and in general getting ready for the busy baby season that is just around the corner. We celebrate the unusual quiet, renew our energy, but prepare for what is sure to come.