This bird came to RMRP in 2012 after he was witnessed falling out of a tree in Casper, WY. When he arrived at the center, he was close to death. He was unable to move his legs or see and was very lethargic. Each day, with supportive care, he became stronger and began slowly recovering from his head trauma. He regained use of his legs and began standing. He began eating on his own and was heading for recovery. Unfortunately, he failed prey testing two times, unable to make those fine adjustments to successfully catch food. He came so far in his recovery and was so close to release. Sadly, some minor neurological issues from the head trauma remained, including a visual deficit from retinal scars and a cataract in his right eye.

Now, as an Educational Ambassador bird, this Great Horned Owl relies on the people who work with him to help him feel comfortable. When at exhibits and programs, he is commonly seen staring intently at his handlers. If anything alarming happens, he reacts based on how the person with him acts. At one of his first exhibits at the Colorado Renaissance Festival, an elephant walked by the booth. Clearly he had never seen an elephant before, given they aren’t the local wildlife seen in Casper, WY. He stood up very straight and alert and nervously looked at his volunteer handler. When the volunteer handler that was working with him did not react with alarm at the elephant, he visibly relaxed. This demonstrates his trust of those working with him and shows that he is a really great Educational Ambassador, becoming comfortable with all his new job duties. This trust he has in the humans caring for him will hopefully help him be at ease and live a long and healthy life in our care. 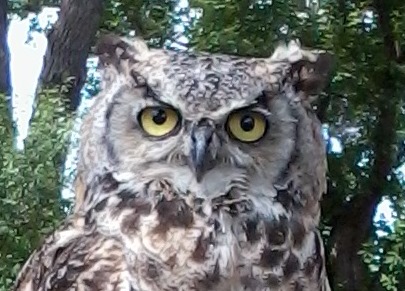