This Rough-legged Hawk was originally an Educational Ambassador for the Laramie Raptor Refuge.  He was admitted in 2002 as a first year bird with severe head trauma probably due to being hit by car.  This left him with a right eye vision deficit and some signs of brain trauma.  His injuries prevented him from surviving in the wild.  He was transferred to the Rocky Mountain Raptor Program in 2010 when the Laramie Raptor Refuge closed.

“Rough-legged” refers to the hawk’s legs, which are completely feathered down to the tops of their toes.  In winter this species moves to lower latitudes with Southern Colorado being about as south as you will find them.

This amazing raptor education thousands during his time at Laramie Raptor Refuge and at Rocky Mountain Raptor Program. He is remembered as being interactive, gentile, and extremely intelligent. His charismatic demeanor will be greatly missed. We hope his spirits soars in the way it couldn’t in life. 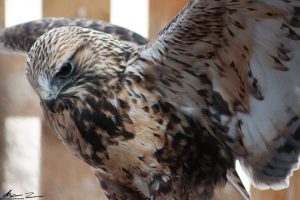