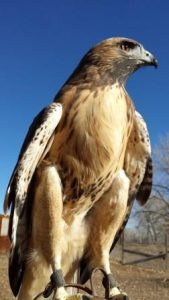 This Red-tailed Hawk was found on the side of I-25 near Fort Collins in 1999.  He had sustained a fractured right clavicle & coracoid (shoulder area) and head trauma, which impaired the vision in his left eye. Because of this impaired vision, he could not be released.

He was an adult when admitted, so we have no knowledge of how old he is.  Because Red-tailed hawks have no plumage difference between males and females, we use their weight to determine their gender. Males are usually smaller than females. This bird’s weight is right in the middle range between male and female so we really don’t know for sure whether it is a he or she.